Crowd sourcing platforms are inspiring a new wave of project funding in both the creative and business worlds.  Contrary to the belief held by many, Kickstarter is NOT intended to fund nonprofit or philanthropic projects. It is intended to provide a means to obtain capital through public financing. In the case of Kickstarter that can be anything from the production of a play to the manufacture of a 3D printer. 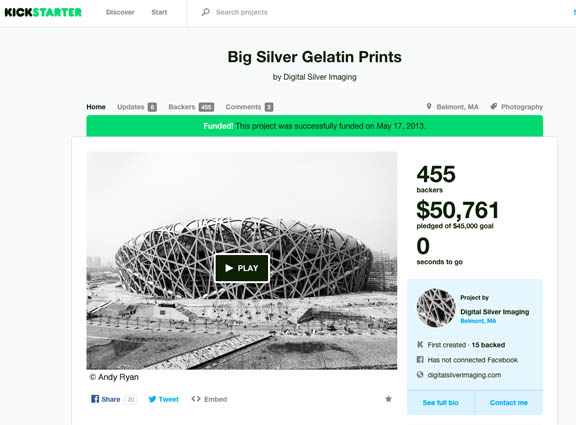 Our Kickstarter campaign, The Big Silver Gelatin Print, took a year to pull together and 30 days of nonstop effort to reach a successful conclusion. In this posting we’d like to share what we learned and how we went about putting our campaign together.

We are a privately held and financed company. Or as one of our financial advisors calls it, “Hip Pocket Bank.” Financial institutions rarely lend to small start-up businesses like ours. In fact, we approached several banks with our plans to expand our business and none would provide us with a loan.

To grow we need larger equipment to satisfy the demand of our customer base. Basically we needed cash to purchase and modify a custom black & white processor and laser exposure unit. (If you watch our Kickstarter video this is all explained.) After researching the possibilities, we determined that this equipment, along with the needed infrastructure to support it, would cost a a minimum of 100K.

This need is what defined our Kickstarter campaign. We had something to offer the public, big silver gelatin prints from digital files, and we had a defined need, a custom built processor.

Our message was a complicated one. We wanted to build a print processor to create traditional black & white photographic prints in a way that few people knew was possible. We had to create excitement about our product, while educating the photographic public that what we were doing was possible. This was not a simple task.

In our case we started with the video script. The script help us define the campaign and our message as it was rewritten numerous times. The script was read aloud to friends and family until we felt we couldn’t do any better. We were fortunate enough to also know a professional videographer who agreed to film our video. For us the editing was key, as it allowed us to introduce still images that emphasized and illustrate what was being said. Even the still images we used were included in the scripting processes.

The finishing touch was a musical sound track and we were ready to launch. If you don’t have access or the budget to the tools and persons necessary for a high end production don’t worry. There are many Kickstarter videos that are done with an iPhone. Remember that you don’t need HD video but please do place your camera on a tripod and have your subject well illuminated. You do not want your video quality to distract from your message.

Video completed, we carefully completed the online form. We double and triple checked the information and submitted our campaign. After one week of waiting we were turned down with little explanation. Huh! What the heck happened?

You can only communicate with Kickstarter via email so it can be difficult to have a dialog. We were told that our campaign was basically a request for a general operating loan. We replied that we had a definite project based proposal and we need to manufacture a piece of equipment to make it happen. We heard nothing back. After all that time and effort all we got was “no.”

Months passed and we scrambled to find funding. Let me say right now that banks suck. Although we had a solid track record of growth no one was willing to lend us money. It looked like we would have to dig deep into “Hip Pocket Bank”  one more time if we wanted to make this happen. That’s when we came across a new campaign on Kickstarter.

A Boston area restaurant had a campaign to raise funds for the machinery to make salsa. The reward to contributors would be the salsa. In concept this was no different then our campaign. Finance a machine to make something that people want.

We contacted Kickstarter and politely and concisely made our case. We waited another 10 days before we received a response from Kicktarter. The response was “Yes!”  Kickstarter really reads your emails. Don’t forget that there are people behind the Kickstarter web site. Be professional, courteous and factual in all your communications, it will pay off.

Now we had to do was launch our campaign, sit back, relax, and watch the cash flow in.  Well it wasn’t that simple, but more on that later.

Some campaigns wildly surpass their goals, but even more just squeak by or fail. With Kickstarter it is better to set a realistic, conservative goal for your campaign. Remember if you fall short of your goal you get nothing. Before launching check the interest in your community. For example, are you bringing a product to market that every iPhone user will want, or is it a niche product that at most will appeal to a few hundred people?

The debate over setting our goal was lengthy and actually gave us insight into how productive our new processor would be. We examined past sales of smaller prints and used those figures to estimate sales of the larger prints we would be offering through our Kickstarter campaign as rewards. Remember we needed 100K but in the end we set our goal at 45K. We committed to finance the remaining 55k ourselves. In the end this was the right decision.

The first couple of hours of the campaign were amazing. Amazing because our regular customers and friends that had been waiting for us to launch were all ready to pledge funds. At the rate we were going we would double our goal. This momentum didn’t last. After about a week things really started to slow down, now it looked like we wouldn’t make our goal. Again missing your goal in Kickstarter means you get nada, zilch, nothing. panic started to set in.

We knew that we had to start pushing our campaign and the first stop was social media, Facebook, Twitter, and Linkedin. We did our best to post about the campaign whenever we had a reason. However, simply spamming your own social media accounts will annoy your customer base.

Time to reach out and get creative. First we called on our most loyal social media followers to spread the word on their own social media platforms. We also “boosted” our own Facebook posts to reach people who had never heard of us before. Boosting posts cost money so if this is in your strategy then you need to budget accordingly.

For us social media was an essential marketing tool. In determining what goal to set on your campaign review your social networks. Do you have the reach it will take to achieve your goal? What “friends” can you count on to help you publicize what you are doing? Will paying to “boost” your social media message fit into your plan?

Social media is all about influence. Your Aunt Rose can share your post but she will probably not have the following that a mover and shaker in your industry. Also before you start your campaign cultivate relationships with “celebrities” in your area of influence. For example, if your product is related to cycling, a post on the Facebook page of a famous cyclist is valuable publicity.

Online media, blogs and forums are also a great way to drive traffic to your Kickstarter campaign. We contacted bloggers on photo related sites and asked them to post about our campaign. We received a great post on the site of Dwell Magazine and the popular photo blog Pixque.com.

To a lesser extent chat rooms and forums also provided referral traffic to our campaign. These forums can be tricky. In one case we had two other labs bad mouthing our campaign. If you run into this simply stay positive, don’t reply directly to negative posters and use it as an opportunity to spread more information about your product. Trolls are everywhere and it is best to travel over the bridge instead of go into their dark dank world.

For us our 30 day campaign was filled with phone calls, emails, monitoring the web, and contacting people. For Digital Silver Imaging the launch of our Kickstarter  was just the beginning of the hard work. Don’t underestimate the investment in time and energy a Kickstarter campaign requires. You will work for every contribution you get.

We exceeded our goal by about 10%.  Yes the cash we raised was great, however just as good was the many new customers that our campaign created. In addition, the buzz and the press generated around our campaign certainly raised our profile as a business.

The processor and our newly remodeled lab are now up and producing amazing big beautiful silver gelatin prints. My final word on Kickstarter is that it is a great benefit to small creative businesses. Kickstarter draws on all the benefits of information technology and the digital community that is so important to growing businesses of today.

If you are embarking on creating your own Kickstarter it is essential that you start by getting involved in Kickstarter. Actually contribute to some campaigns related to your area of interest. Look at successful and unsuccessful campaigns and ask why? Don’t forget that Kickstarter is also based on trust. Be honest, provide good information, and a good product, and above all make sure you can deliver what you promise. Good luck!

Black-and-white photographic material is capable of a lot more range, nuance, and subjectivity than we usually see. I wanted to realize the vision for this work not only through the landscape but through the subjective material manipulation of the photographic print (DSI Digital Silver Fiber Prints®). In the work of photographers like Ansel Adams, W. Eugene Smith, and Roy DeCarava, Read More

Our Value Frames include a 4ply Museum Rag window mat with acid free foam core backing, framing grade clear acrylic, hanging hardware, and paper backing on the wood frames. These frames are only available in the sizes listed. For custom sizes see our Made to Order Value Frame options.

We print on roll paper – custom sizes are available.
10% Discount with 10 or more prints from different files. Contact us about your project for a custom quote.
13×19 Pigment Proof Prints $25


We print up to 50″ wide, and 120″ long – custom sizes are available.
10% Discount with 10 or more prints from different files. Contact us about your project for a custom quote.
13×19 Proof Prints – Fiber Proof  Print $40, RC Proof Print $30
Welded Aluminum Frames

All files printed at Res 80 at 2032PPI. Orders greater than $600 will receive an additional 10% discount
Custom Wood Frame Pricing

Prices include a 4ply window mat with acid free foam core backing, UV plexiglass, and hanging hardware and paper backing on the wood frames. Upgrade to 8 ply mat board is an additional charge. Contact us for sizes not listed.

Prices include your print mounted to 3/16 gatorboard, spacers, UV plexiglass, and hanging hardware and paper backing on the wood frames. Contact us for sizes not listed.

Pricing is for a pair of Print Hangers, top and bottom.