Walk-ins by appointment only. Please call during business hours. Thank you

Thank you for attending the Better B&W Prints with Nik Silver Efex webinar with our friends from DXO, Dan Hughes and Laurie Rubin. To get you started we are making this limited time offer available through our online Value Print service.

Valid for Value Prints only Not available on Custom Printing services.

For help exporting your files from Adobe Lightroom follow this link. We recommend that when converting color files to black & white that you preserve the RGB layers. Conversions can be made in Adobe Photoshop or Lightroom. We also highly recommend the Nik Silver Efex (part of the DXO Nik Collection) software application for converting images to b&w.

For a how-to on using our Value Print application watch our webinar. For the best results – Make sure your monitor is accurately calibrated, as we do not reprint orders or make adjustments to your file before printing with our Value Print service. If this is your first time printing with us we recommend running a test with our B&W Print Sample Promotion or Color Print Sample Promotion.

In this post we have created a chart that compares existing and currently supported devices* to our state-of-the-art digitization service. When digitizing your film and prints you have a variety of options. There are many legacy system that do an adequate job, but all are slow and require older software and older computers to run them. 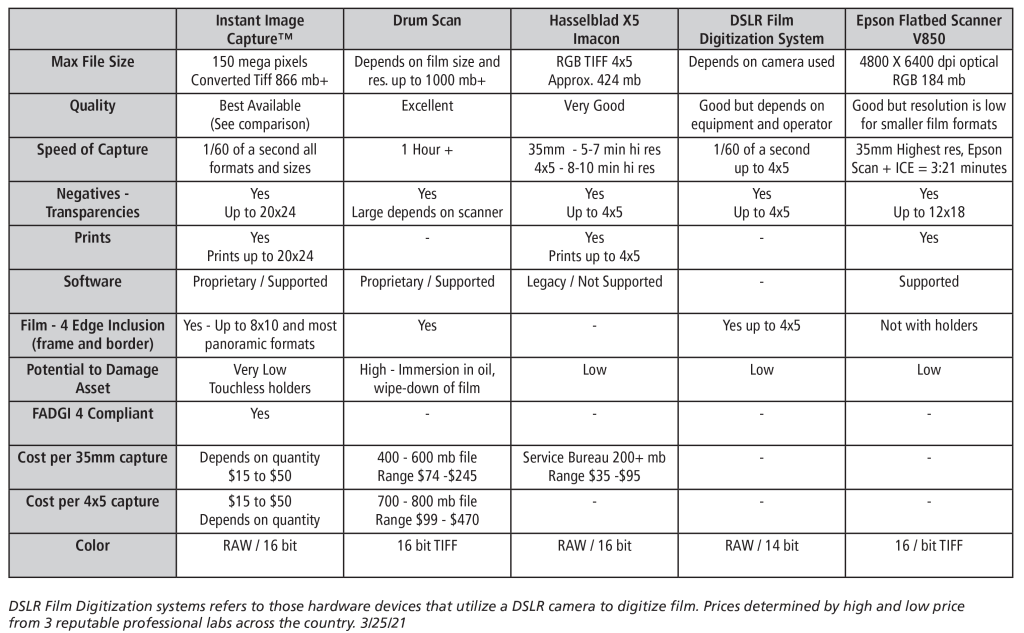 *The Hasselblad X5 Film Scanner is no longer supported by any manufacturer. The X5 is included here as it is still used commercially.

ENTER BELOW TO WIN THE $295 GIFT BUNDLE

The Gift bundle includes $250 in digitization and/or printing from Digital Silver Imaging plus an autographed copy of Rick Smolan’s best-selling book Inside Tracks ($45) which captures the astounding story of Robyn Davidson, who crossed the desolate Australian Outback accompanied only by four camels and a dog. 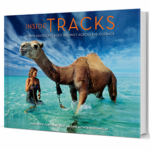 Her journey was originally featured as a National Geographic cover story and recently a major motion picture titled Tracks starring Adam Driver. The book incorporates technology which enables the reader’s smart device to point to any of Rick’s original pictures and bring up scenes from the award winning movie.

*15% Off applies to Value Print orders only, discount does not apply to shipping.

Entering this contest will add your email to the Digital Silver Imaging email list, you can always opt out later.

The Instant Image Archive Service produces drum scan quality at a fraction of the price and in a fraction of the time. We can make this claim because we ran a test. The examples in this post show the same black & white negative reproduced by drum scan and by the Instant Image Capture System. These are straight reproductions, just as they would be delivered with only the image inversion performed.

From these samples it is obvious that there is no qualitative difference between the two. This is amazing in that the Instant Image Capture is 1/5 to 1/10 the price of most drum scans and it takes only 1/60 of a second, allowing for 100s of high resolution captures in a day.

If you have 500+ negatives, transparencies, or prints up to 20×24” you’d like us to scan we can bring our system to you! Our On-site Instant Image Preservation Service™ brings our system to your location in a custom built van. Now you don’t need to worry about moving or shipping your valuable archive. This service is available anywhere in the contiguous USA. Contact us for more details or for a quote.

Elliott Erwitt’s many photographs have become part of the world’s visual vernacular. His images for Look, Life, and Magnum capture a world of humor, beauty and irony. His prolific output has filled over 20 published books, with a new book just released in 2021. Elliott’s prints are in virtually every major museum collection in the US and abroad. At the age of 92, Elliott Erwitt hasn’t slowed down much, he’s involved in a variety of projects and working on his archive.

Elliott Erwitt’s archive is where Digital Silver Imaging comes into the picture. Rick Smolan, former Time and National Geographic photographer and Elliott’s son-in-law, came to us with an idea for on-site film digitization. He said that Elliott was reluctant to have his archive leave the studio—a concern widely shared by other photographers—so high resolution on-site high resolution image capture would be ideal. Within In a few short months we had sourced the required high resolution equipment, hired PhaseOne and CaptureOne expert Scott Nidermaier, and formed the Digital Silver Imaging On-site Image Preservation Service™. 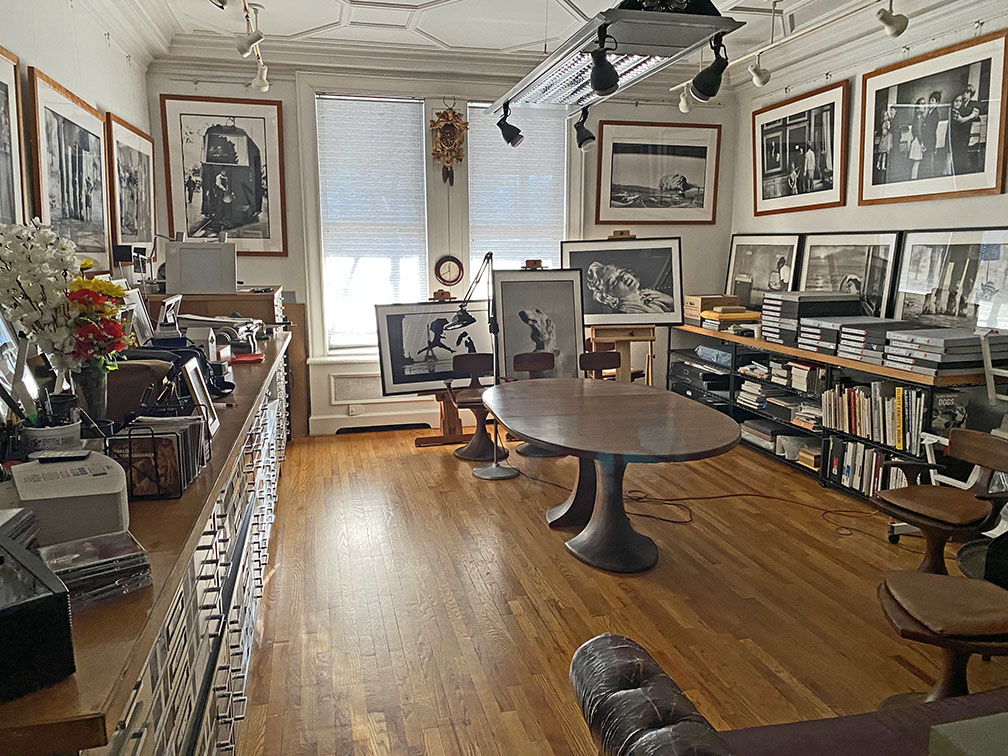 On a chilly Sunday afternoon, Scott and DSI’s Eric Luden got to work digitizing Elliott’s archive. Over the course of the next several days the pair would set up in Elliott Erwitt’s studio and rapidly capture some 3,400 negatives and transparencies. For some photographers such an undertaking could take months or even years, but utilizing our On-site Image Preservation Service™ the job was completed in under three weeks. At the core of the system we utilize a high resolution digital camera mounted with a flat field lens. This method of digital capture produces drum scan quality images with a click of the shutter. Unlike drum scanning, this process minimizes contact between film and machine, dramatically reducing the risk of scratching or damage.

Scott has emphasized that each job is different and attentive preparation is the key to a smooth digital archiving process. The On-site Image Preservation Service™ operates on the principle that every archive is unique, and we customize the service to fit the needs of each client.

Much of the credit for the efficient digitization of Elliott’ Erwitt’s archive goes to his studio manager, Mio Nakamura, who organized the film by box, contact sheet, and negative with a corresponding spreadsheet, so there was no confusion about which images to capture. With the digitization of Elliott’s prized images now complete, his entire film archive will be housed at the Harry Ransom Center at the University of Texas at Austin. It’s a comfort to know that Elliott’s film will be preserved in perpetuity.

Looking back on Elliott’s project, Scott reflected, “It was fascinating to see a sheet of great negatives and wonder why Elliott picked one negative over another. Also, we digitized many images of family that obviously had personal significance to Elliott. Elliot Erwitt lived with a camera in his hand. Sure the Marilyn Monroe and celebrity images are amazing, but there are so many great images that have never been seen before. It makes you realize that archiving is not just about a financial legacy, it’s a personal legacy. It tells you so much about the life of the artist.” 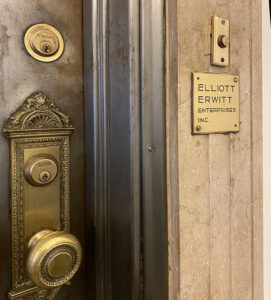 Digital Silver Imaging is grateful to Elliott Erwitt, Mio Nakamura and Rick Smolan for inviting us to collaborate on this important project. We feel that we played a role in photo history, providing a service to one of the greatest living photographers.

12/2/20 – Due to a high volume of orders and shipping delays that are out of our control, we are unable to provide guaranteed holiday delivery dates this year. Our estimated turnaround for all printing is currently 7-12 business days.

Print orders submitted after 12/13 are not guaranteed to be ready before Christmas, so please get your orders in as soon as you can!

Big shout out to @ericluden & killer team @digitalsilverimaging for the stunning prints you made for my recent show @leicagalleryla – I did not get to properly thank you for all your hard work!! I just saw this on my studio wall today which reminded me- this one print was 8’ wide, perfect! Great file from #leicasl of course 🙂 Read More